My oldest child and I have developed an amusement for ourselves at the local public library, guessing the parts of book titles that are obscured by the stickers:

I’ve turned the picture on its side for ease of reading. I guessed that the top one was The Secret of Southern Comfort. I was, alas mistaken—the actual title is less interesting to me, but what do I know. The other one I guessed correctly. Some are easier than others.

Here are three more, from the teen room this time:

The top one is tricky; the middle one is impossible; the bottom one is obvious, at least on those of us who have been playing this game on the teen shelves for a while.

How about another set? 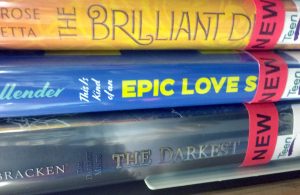 For the top one, I guessed it was A Brilliant Dawn, but my child pointed out that you could see that the letter after D was straight-backed, and therefore probably an E or an R. It is in fact—well, I won’t give away the answer, but I would not have guessed it. For the middle one, the obvious answer is the correct one, but for the last one the obvious answer is not the correct one—it’s in the Darkest Mind series (as it says on the spine), but this one is the Darkest something else.

I was really pleased that I guessed this one, but my kid got with no hesitation whatsoever. Maybe it was easier than I thought.

OK, one more for today:

I like this one because not only does it draw on the knowledge of both book-cover fonts and YA title conventions, but it’s possible not only to guess the correct title of this book, but the title of book one as well.